What Are Vapor Recovery Units (VRU’s)?

A Vapor Recovery Unit (VRU) is an engineered compression package, which aims to lower emissions levels coming from the vapors of gasoline or other fuels while recovering valuable hydrocarbons to be sold or reused as fuel onsite. A package for vapor recovery is designed to capture about 95% of Btu-rich vapors, generating many benefits, guaranteeing less air pollution, and recovering gasoline vapors to be used as fuel.

Benefits of a VRU System 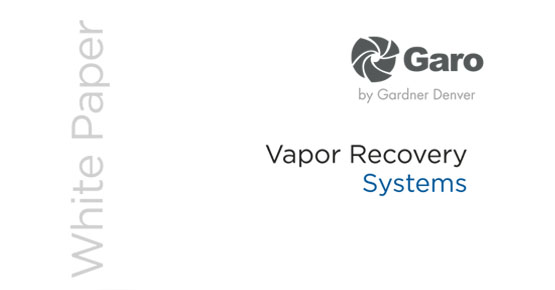 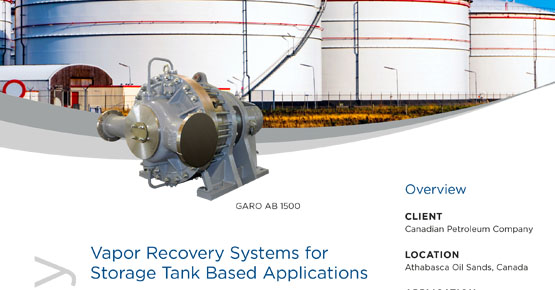 There are different applications of the Vapor Recovery systems:

Garo is specialized in designing and engineering custom made Tank Vapor Recovery Systems for the Oil & Gas operations, using liquid ring compressors as the means of compression.

When crude oil is stored in storage tanks, the vapor space above the liquid will become saturated with VOCs to reach equilibrium. Changing liquid levels due to loading and unloading of the tank will cause changes in the vapor space.

Ambient temperature changes can also change the vapor pressure inside the tank above the liquid and can lead to the venting of the VOC saturated vapor to the atmosphere or allow to air ingress into the tank, if the tank is rapidly cooled, forming a potentially explosive atmosphere inside the tank. The VOC containing vapor that is vented through boil-off (hot ambient days) or through loading operations can be recovered and compressed.

The gas (1) coming from the tank farms entersthe Liquid Ring Compressor (2) along with the process water (3).
After thecompression phase, the gas, water and hydrocarbon mixture enters the separator(4) where the three elements are parted: the gas passes through a demister (5)to remove water droplets and leaves the vessel from the top, whilecondensed hydrocarbons and water are separated from the vapor stream by gravitydue to reduced gas speed.
The water is sent back to the compressor, afterbeing cooled by a cooler (6). Moreover, continuous process water make up line(7) in the compressor, suction is provided to ensure a continuous water ring inthe compressor. The condensed hydrocarbons are discarded or put back into thetanks (8). The gas exiting the separator finally heads to the Gas GatheringSystem (9). 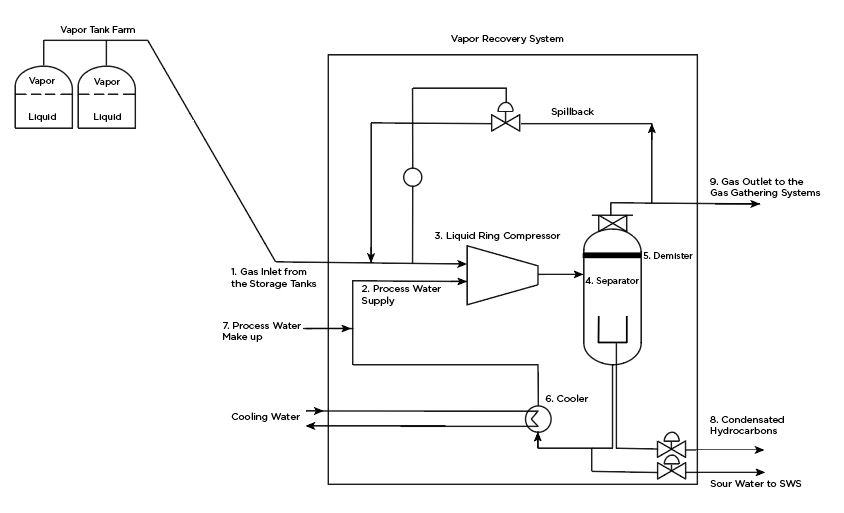 Which Types of Compressors for Vapor Recovery

Which Types of Compressors for Vapor Recovery

The most commonly used compressors (rotary and mechanical) used for VRUs include:

Garo Vapor Recovery Units are built around the liquid ring compressor, which compresses the gases using a seal liquid. The process liquid is fed into the machine and, by centrifugal acceleration, forms a moving cylindrical ring, which takes the shape of the double-lobe eccentric casing.

This liquid ring creates a series of seals in the space between the impeller vanes forming the compression chamber. The gas is fed into the machine by a distribution cone and it is compressed by the rotation of the impeller inside the seal liquid.

Liquid ring gas compressors have been used successfully in vapor recovery systems for more than a decade.  There are distinct advantages of using Garo liquid ring compression for vapor recovery.  The compression occurs inside a liquid bath (typically water), making the compression cycle intrinsically safe.
The liquid bath also absorbs the majority of the heat generated by compression, actively cooling the gas vapors during the compression cycle. The seal liquid is also cooled to remove heat and maintain near isothermal compression within the system.The liquid bath is also effective at removing fine particulate matter entrained in the vapor stream. Garo liquid ring compressors can also withstand some small amount of free liquids in the incoming gas stream, potentially removing the need for a suction knock-out. 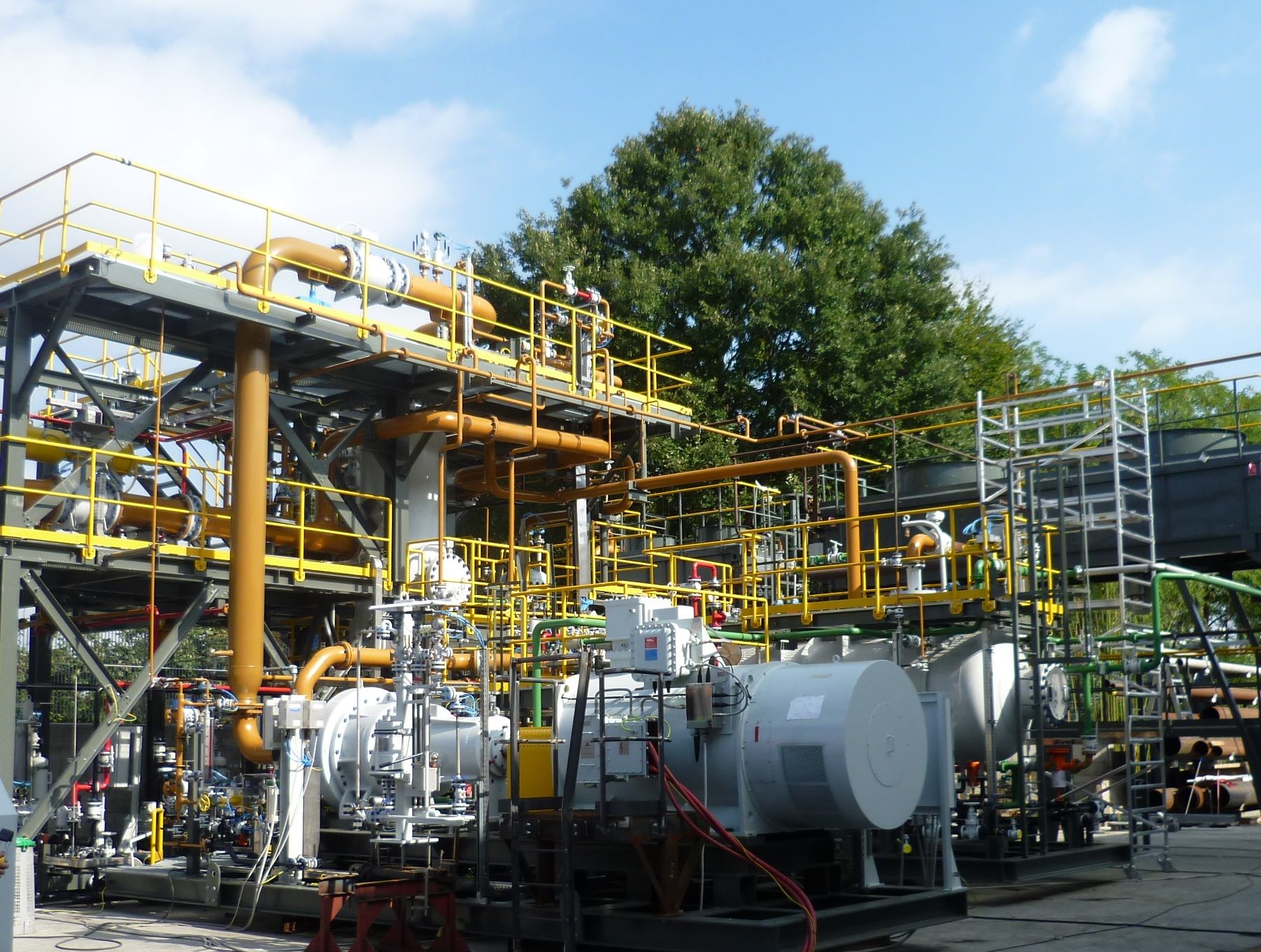 Are there different types of Vapor Recovery Units(VRUs)?

Yes, there are two completely different pieces of engineered equipment for different applications that are both referred to as Vapor Recovery Units.

What is the difference between a mechanical and a carbon bed or adsorption type vapor recovery unit(VRU)?

A mechanical VRU is a compression package that is often used to recover tank vapors- gas formed when liquid in a storage tank is heated by outdoor temperatures and collects in a space at the top of the tank. Tank vapor is routed to a mechanical VRU, where it is then compressed and sent to a pipeline that delivers the gas to another part of the facility or to a sales pipeline.

A carbon bed or adsorption type VRU is essentially a large filtration system. These are used to handle vapors that are offset during liquid loading of trucks, railcars, marine vessels, or tanks. Vapor is routed to the VRU, where it passes through a bed of activated carbon that adsorbs hydrocarbons and allows clean air to exit the system. When the carbon bed reaches its maximum capacity, a vacuum pump can then extract the hydrocarbon vapor, send it to an absorber tower, and return the vapor back to a liquid state, so it can be put back into the tanks.

Since 1947, Garo has collaborated with companies around the world to custom design compressors that enable safe handling of toxic and corrosive gases. More than 70 years of engineering expertise allows us to support clients from concept/FEED studies through project execution to site services and more.